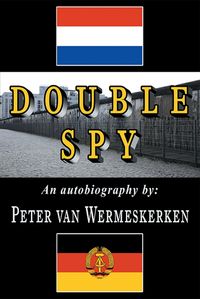 Double Spy is my autobiography as a double agent in East Germany and the Netherlands, from March 1967 to September 1970. While I visited a young woman in Chemnitz, two men approached her, wanting to see me. Soon after, we spoke, and they recruited me as a spy for the HVA (intelligence service of the Ministry of State Security, the STASI).

Back in the Netherlands, I immediately reported to the BVD, which ‘took me over’. I was only 27 at the time. I had no formal education, and the officers in the HVA—“the People’s Army”—were high school graduates, having only attended a ‘college’ to become a spy. The ‘officers’ were not capable enough to question me with much success. Their weak attempt to drink me under the table failed miserably, thanks to my epilepsy medication.

My story revolves around the Cold War, but it reveals the unhappy lives of the people living under the dictatorship. My life’s story celebrates how happy and thankful we should be to live in a free country.

Ultimately, Berlin threatened me. My wife convinced me to leave the spy business behind once she conceived our son. My name has surfaced in the STASI archives, but nothing more.

This is my story as a Double Spy.

About the author:
Peter van Wermeskerken (born 31-12-1939 Zeist) was 14 when his father asked him to help reporting for his local newspaper. He was co-winner in an essay contest on agricultural cooperative in the EEC (1960). He worked at various newspapers before joining the New Zeister Courant in 1965 to succeed his dad. Begin 1970 he went to Algemeen Dagblad newspaper at Rotterdam. There he specialized in reporting on energy and the economy. In 1989 he was appointed to the chief economic desk. Since late 2008, he and his wife live in Uelsen, Germany.

The Confessions of Arsène Lupin = 亞森羅蘋冒險系列之羅蘋的告白

A Vindication of the Rights of Woman

The Travels of True Godliness = 敬虔腳蹤行

The Cricket on the Hearth = 爐邊的蟋蟀

Heart of the West = 西部之心